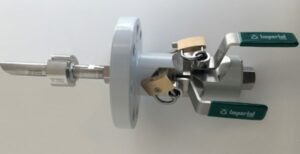 Our sister company Imperial Valve received a special order from Van Leeuwen Pipe & Tube Malaysia, part of the Van Leeuwen Pipe and Tube Group. It concerns injection and sampling ‘Double Block & Bleed Valves’, made of the exotic material Inconel Alloy 625 and equipped with a special coating.

The end-user – Bumi Armada Berhad from Malaysia – obtained several quotes for eight sampling valves and three chemical injection valves. Imperial Valve was one of the offering companies. Wim de Ridder – Sales Manager at Imperial Valve – explains that three factors played a role for Van Leeuwen in the choice. “Firstly, the material Inconel Alloy 625 was absolutely essential. We suspect that many Asian suppliers are struggling with this demand, but for us it is no problem. Secondly, we have offered a very competitive price. Finally, we could guarantee the required delivery time – I suspect that this was the decisive factor. On 23th November, the order was formally confirmed, on 24th February we delivered the valves. That is relatively short for such custom solutions.”

Quill/probe according to customer specification

The valves are installed on the FPSO Madura, a new Floating Production Storage and Offloading ship. At the moment, construction is in progress in Singapore. Wim de Ridder states that Imperial Valve is capable for quick responses to such tailor-made work: “We have had the drawings made in our factory in Denmark. It was especially crucial that the Quill/Probe was correctly dimensioned.” After the approval of the drawings by the end-user, the production started. Especially the machining of the material Inconel Alloy 625 was time consuming.

Shortly before the shipment to Singapore, the valves were tested at the factory of Imperial Valve in Denmark by an inspector of Intertek Inspection Services Scandinavia. This on behalf of the end-user. Wim de Ridder was present at the testing: “I explained to the inspector how we coated the valves. For example, we have not coated the parts where the gaskets are, to avoid internal damage through the coating process. Moreover, the inspection had a positive result: all eleven valves have been tested on pressure and approved.”

Van Leeuwen our agent in Malaysia

After the delivery Dave Pascoe – Sales Director at Imperial – travelled to Kuala Lumpur to talk to representatives of Van Leeuwen about a closer cooperation. As a result, Van Leeuwen Pipe & Tube Malaysia is now an agent for Imperial Valve, for Malaysia and Singapore. Our valves are a valuable addition to the assortment of Van Leeuwen Tube Malaysia.